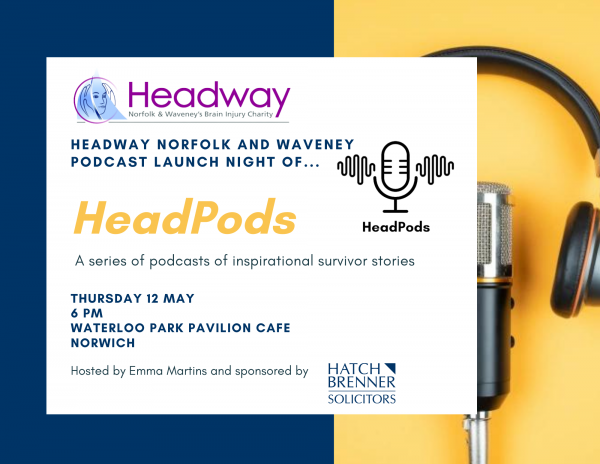 Hatch Brenner Solicitors in Norwich, is sponsoring the brain injury and stroke charity, Headway Norfolk and Waveney's new podcast hosted by Headway employee and former Discovery Channel producer, Emma Martins. The podcast features inspiring interviews with people who have overcome huge adversity following their brain injury. The launch event is on 12th May in Norwich.

Headway Norfolk and Waveney is a charity that supports those affected by brain injury and stroke, whilst working to raise awareness and understanding of these conditions. With the annual ABI Week (Action for Brain Injury Week) just around the corner, 16th – 22nd May, they are launching a new series of podcasts from Emma Martins who herself suffered a brain injury and works at Headway Norfolk and Waveney.

The new podcast is titled Headpods: a series of podcasts of inspirational survivor stories and is produced and presented by Emma Martins. Emma was at the height of her career as a television producer when she sustained a brain injury caused by a life-threatening viral infection she contracted while on holiday in Vietnam. Given just a 20% chance of survival and spending three months in hospital, she fought extremely hard. Following her illness Emma had to relearn how to walk and come to terms with the realisation that it would be impossible for her to return to her previous career. Learning to adapt to having partial sight, cognitive fatigue and severe dyslexia as a result of her brain injury, she created a podcast titled The Longest Battle as part of her own rehabilitation and to help others experiencing their own traumas and life battles. The series included an interview with former model Heather Mills, who had to have her leg amputated below the knee following a traffic collision with a police motorcycle, at the height of her career in the early 90s.

Five years on Emma is working at Headway Norfolk and Waveney to support others with acquired brain injury and following the success of The Longest Battle, Emma has produced her new Headpods series, now being sponsored by Norwich law firm, Hatch Brenner Solicitors. This series features people with first-hand experience of the trauma and effects of brain injury. An exclusive excerpt of the first episode will be aired at the launch event on 12th May at The Feed in Norwich’s Waterloo Park. The episode features Stacey, who at 63-years old, working as a construction insurance broker, fell from three steps down an entire flight of stairs at home, whilst rushing to be on time for her Pilates group. She suffered a traumatic brain injury which wasn’t initially diagnosed due to her hip sustaining a break in the fall. During the pandemic, Stacey was unable to find support in the community so a year after her fall she self-referred herself to Headway Norfolk and Waveney. There she joined a peer support group and has since become a volunteer within the charity’s ABI (acquired brain injury) Connections Programme.

“Emma’s podcast is inspirational, not just for her achievements following her brain injury but as a platform to raise awareness of invisible illness and disability” commented Headway Norfolk and Waveney CEO, Michael Kitching. “Launching the podcast for ABI Week reflects this year’s theme of ‘See the Hidden Me’. We are thrilled to welcome our podcast sponsors, Hatch Brenner Solicitors to the launch night, highlighting these inspiring interviews with individuals who have overcome their own life-changing experiences.”

Headway NW Trustee and Hatch Brenner Solicitors Managing Partner, Colin Cook commented, “We are committed to helping raise awareness of the impact brain injury can have on the lives of those affected and their families. Our long-term support of Headway Norfolk and Waveney provides us with opportunities to achieve this and by supporting this podcast, we hope the message will reach and inspire many more.”