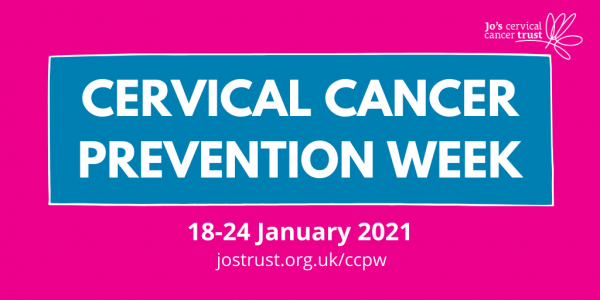 18-24 January 2021 is National Cervical Cancer Prevention Week. This awareness raising event provides the opportunity to highlight the risks of cervical cancer, and help women and people with cervixes learn about how to reduce these risks and prevent the illness.

Cervical cancer develops in a woman’s cervix and it mainly affects women aged between 30 and 45. There are around 3,200 new cervical cancer cases in the UK every year which is more than eight per day. It is the fourteenth most common cancer in females in the UK.

It is vital that individuals:

• Know the symptoms of cervical cancer and seek medical advice if they are experiencing any;

• Take up the HPV vaccine if they are aged 11-18, and encourage others to do so;

• Know where to find support and further information.

Cancer of the cervix often has no symptoms in its early stages. The most common symptoms, if you do have them, is abnormal vaginal bleeding which can occur during or after sex, in between periods or new bleeding after you have been through the menopause.

If you experience abnormal bleeding, you should see a GP as soon as possible to get it investigated by your GP. If a GP thinks you might have cervical cancer, you should be referred to see a specialist within two weeks.

The best way to protect yourself from cervical cancer is by attending cervical screening (also previously known as a “smear test”) when invited.

The HPV vaccine has been routinely offered to girls aged 12 and 13 since 2008. However, it is important to attend your cervical screening tests, even if you have been vaccinated for HPV, because the vaccine does not guarantee protection against cervical cancer.

If you have not been sent a letter confirming when it is time for your screening appointment, you should contact your GP if you think you may be overdue.

Alex Davies-Jones MP most recently highlighted the importance of cervical screening tests as she put off a smear test for several months which led to having most of her cervix removed. The 31-year-old was invited to her first screening in December 2015 and had put it off until a reminder followed in April 2016.

It was discovered that she had abnormal cells which if left untreated, had a high chance of becoming cancerous. Ms Davies-Jones had put off her cervical screening test as she experienced no symptoms or abnormalities although, as mentioned above, the early stages of the cancer have no symptoms therefore, attending screening tests is vitally important.

Delayed Diagnosis and Cervical Screening due to COVID-19

It is important to attend your screening appointment when you are invited and to not delay your appointment without good reason.

It is important to remember that screening is for healthy people with no symptoms. If you notice any unusual changes to your body that do not go away, you should talk to your doctor to get it investigated. An abnormal screening result is not conclusive of having cervical cancer. It is a detection of abnormalities of cells which if left untreated could potentially become cancer in the future.

Where your cervical screening appointment has been cancelled and you have not received a new appointment after three months, you should phone your GP to see if they have an idea on timeframes of when you are likely to be reinvited.

Almost all cases of cervical cancer are caused by HPV which is a common virus that can be passed through any type of sexual contact with a man or a woman. There are more than 100 types of HPV, many of which are harmless. Some types of HPV can cause abnormal changes to the cells of the cervix, which can eventually lead to cervical cancer.

The two most common strains of HPV, HPV 16 and HPV 18, are known to be responsible for most cases of cervical cancer. They do not have any symptoms so most women will not realise that they have it. These two high-risk types of HPV stop the cells working normally, which can eventually cause them to reproduce uncontrollably, leading to the growth of cancerous tumour.

You can reduce your chances of getting cervical cancer by not smoking as those who smoke are less able to get rid of the HPV infection from the body which can develop into cancer.

Most cases of cervical cancer are linked to a type of HPV which can spread through unprotected sex so, using a condom can reduce your risk of developing the infection. However, the virus is not just passed on through penetrative sex, it can be passed on through skin-to-skin contact between genitals.

HPV infection being common, and cervical cancer being relatively uncommon, suggests that there is a small proportion of women who are vulnerable to the effects of an HPV infection. There appear to be additional risk factors that affect a women’s chances of developer cervical cancer, these include:

• Having a weakened immune system

• Having more than five children or having them at an early age (under 17 years old) – the reason for this link is unclear however, one theory is that the hormonal changes that occur during pregnancy may make the cervix more vulnerable to the effects of HPV

If diagnosed in the early stages, it is usually possible to treat cervical cancer using surgery. In some cases, it is possible to leave the womb in place, but it may need to be removed. The surgical procedure to remove the womb is called a hysterectomy.

Radiotherapy is another option for women in the early stage of cervical cancer. It may be used alongside surgery or chemotherapy, or both.

Some of the cervical cancer treatments can have significant and long-lasting side effects including early menopause and infertility.

Complications can arise as a direct result of the cancer or as a side effect of treatments such as radiotherapy, chemotherapy, or surgery. Complications associated with cervical cancer can range from the relatively minor, like bleeding from the vagina or having to pass urine frequently, to life threatening complications such as severe bleeding or kidney failure.

If your ovaries are surgically removed or damaged during treatment with radiotherapy, it will trigger an early menopause (if you have not already been through it).

In some cases of advanced cervical cancer, the tumour can cause a build-up of urine inside the kidneys (hydronephrosis) which can lead to loss of most or all of the kidneys’ functions, this is called kidney failure.

It is important to attend cervical screening appointments and raise any symptoms you may be experiencing with your GP for further investigation.

If the cervical cancer is late diagnosed, undiagnosed or improper treatment has been given, you may be able to claim compensation for medical negligence. Hatch Benner Solicitors has extensive experience in advising clients regarding cancer medical negligence claims including failings in screening programmes, samples wrongly interpreted by pathologists, inadequate surgery, poor palliative care or wrong diagnosis of cancer leading to unnecessary treatment. Contact Partner and Medical Negligence Specialist Sara Westwood via sarawestwood@hatchbrenner.co.uk or call 01603 660 811.