*The case study below is an entirely fictitious example created for illustrative purposes and is not in any way whatsoever based upon the facts of a real-life situation. 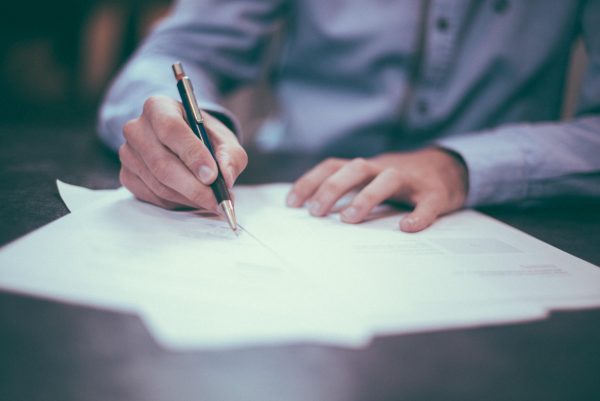 A settlement agreement (formerly known as a compromise agreement, or a mutual termination agreement).

Maria has been the residential sales manager at AB Estate Agency for just over four years. She manages a small team of four sales representatives, including herself, with a shared secretary.

At the end of the working day, Maria is suddenly called in to speak with the two managing partners at her branch. The meeting is short with the two of them immediately engaging Maria in what they describe as a “protected conversation”. Maria is informed there have been recent complaints of bullying, along with serious loss of temper and foul language, separately made by two of her small team, that the female member, the most junior, left work early in tears two days ago, after being harangued by Maria for her sales figures and told she was useless. The partners inform Maria that they find her attitude has recently become surly and confrontational, with sales for the previous two months being disappointing.

The bullying complaints will need to be formally investigated with the strong likelihood, from what is known so far, that Maria may have to be subjected to a formal disciplinary process which could potentially lead to her dismissal.

The partners feel, quite frankly, that much trust has been lost, and inform Maria that, if she so wishes, an alternative way forward is that, upon the basis of her leaving at the end of the current month, Maria would be offered a settlement comprising her contractual entitlement to one month’s notice together with a tax-free sum equivalent to one further month's salary, by way of compensation.

They hand Maria a document which she is told is a draft Settlement Agreement, recording the terms on which her employment would end. Maria is advised she will need to take the document to a solicitor to whom they will pay £350 plus VAT for Maria to be advised on it. Maria is told she is not obliged to accept this proposal, it is an option being offered instead of dealing with the consequence of the employee complaints and other serious concerns they have.

Finally, Maria is invited to not come into work whilst she “thinks about” the position, and that she has 10 days to decide on the settlement offer and seek legal advice. She is also informed that if disciplinary investigations do formally go ahead, it is likely she will in any event be suspended from duties and that, for now, her work colleagues will be informed that Maria is taking a few days away to sort out some personal issues.

Meeting with a solicitor

Maria arranges an immediate appointment with solicitors, still taken aback by these developments but realising she may of late, has not been an easy boss due to some specific personal issues, namely, having just broken up with her boyfriend, during which same time her widowed and quite elderly mother has had a number of health problems, making it necessary for much time and care on Maria’s part. Maria has also been frustrated with the limitations of the two employees in question, recent sales figures have indeed been disappointing, and she feels more effort on their part would have been expected.

Maria advises all of this to her solicitor. Her solicitor asks her, firstly, whether she wishes to leave AB or would rather continue and try to resolve the issues with both the partners and her sales team, and that if the first of these options is preferred, then it will be necessary to look at the proposed settlement terms. Maria answers that having had a couple of days to think about it, she believes there is now no future for her at AB, that the partners have taken against her and it would be better to move on.

Her solicitor suggests in that case they should look at the Settlement Agreement. He comments that the terms do not seem particularly generous, Maria having advised that her basic salary of £20,000 pa is supplemented by commission of anything between £750 and £1750 per month, plus car, which the terms of settlement require be returned on the termination date, in two weeks’ time. There is to be a “standard” employers reference giving simply dates of Maria’s employment with AB, and her job role, but making clear in the wording that it is AB’s policy always to give only a standard reference. Maria advises that she understands the purpose of the proposed Settlement Agreement is to preclude her from being able to bring any claims upon AB once having accepted its terms.

Maria’s solicitor then notices a clause in the Settlement Agreement which says that the restrictions contained within paragraph 20 of Maria’s contract of employment with AB shall remain fully in force. Believing it will not necessarily be in Maria’s interests if those should include restrictions of her future work activities having left AB, her solicitor enquires further upon which Maria produces her employment contract. Her solicitor sees there are restrictions, to run for 6 months, from soliciting clients of AB, with whom Maria has dealt, to a competitor business, and from soliciting staff, but also prohibiting her from working for any other estate agency within a radius of 20 miles.

Maria’s solicitor establishes that before AB, she had worked in property sales for 15 years in all, in a different part of the country, having moved to be nearer her mother, so that Maria’s intention on leaving AB would certainly be to find another position in property selling or sales management. Her solicitor explains that in his view the clause forbidding taking a work role within 20 miles may well go further than necessary to protect AB’s business and therefore be unenforceable, particularly once Maria informs him that of the three other towns within that radius, it is only in one that AB does any significant level of sales business.

Maria’s solicitor can see that these terms are not favourable to her and that Maria herself, although not wanting to stay at AB, is not happy with them. He advises Maria that the costs allowance is not intended to cover negotiations, but if Maria is willing to meet some further legal costs then counter-proposals can be put forward to AB. The present offer means no commissions on completed sales will be payable after Maria’s termination date in two weeks, and also the loss of benefit of the car during the notice period her solicitor advises is unfair.

As a result, and after carefully going through with her the remaining terms of the Settlement Agreement, a “package” of counter-proposals are put forward to AB on Maria’s behalf. In addition to the continued possession and usage of the car for a further month after the termination date, payment of Maria’s employer’s pension contribution for that same notice period, and the waiver of the prohibition from working for a competitor estate agency (whilst accepting the remaining contractual restrictions), it is proposed the tax-free compensatory sum should be increased to the value of three months basic salary.

In the end, following a short further exchange of correspondence between Maria’s solicitor and AB, the Settlement Agreement is concluded on the terms proposed by Maria’s solicitor, with the exception of the compensation which is agreed as the value of two months’ basic salary. Maria’s solicitor has also been able to persuade AB to increase the costs allowance to £500 plus VAT, so leaving Maria with a legal bill that is not unduly expensive for her.

The Settlement Agreement completed, Maria is grateful for the outcome achieved, and by her date of leaving AB, is encouraged to find that responses from a number of enquiries made with other estate agencies looking for additional staff give every reason to anticipate she may not be without work for very long.

If you are an employer and should need advice in circumstances such as these, please contact Dionne Dury at dionnedury@hatchbrenner.co.uk or 01603 660 811.

*Please also note that a Settlement Agreement will always contain a strict requirement for keeping confidentiality. Hatch Brenner, therefore, once again wish to make very clear the above case study is an entirely fictitious example created for illustrative purposes, and is not in any way whatsoever based upon the facts of a real-life situation